Ms. Bridgette, the founder and owner of Las Lengüitas, brings vast experience and a revolutionary hands on style of learning that really engages children and immerses them into the language, in a fun and natural way.
Mr. Ryan
Mr. Ryan loves languages as it gives him a way to connect with other people and cultures as well as heighten his own cognitive ability in doing many other things in his life. It helps his working memory and analytical skills as well.

Ms. Yali began learning English when she was ten, learned Japanese when she was a Junior student and became interested in Spanish when entering graduate school.

Ms. Yali enjoys opera, musicals, and Impressionist paintings. She loves traveling and new adventures. In addition to growing up in China she has also traveled to England, Japan, Indonesia, Thailand, and America. Her first student was her younger brother Zilong.

Ms. Hallie's interest in Spanish started when she was only 11 years old, listening to salsa music. Since then, her love of the language has taken her around the world and back home again.
Although Quito was an amazing place, she returned to Michigan to share her love of the Spanish language and culture with students in the United States. Hallie worked in Grand Rapids Public Schools in early 2018 teaching Elementary and Middle School Spanish, and is now teaching high school Spanish in Potterville, Michigan in addition to teaching with Las Lengüitas. 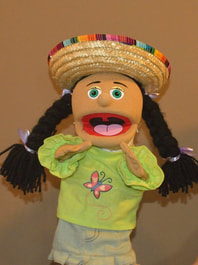 Maria is a talkative girl who enjoys sharing her knowledge of Spanish with eager young children.  She loves to sing, dance, and play with the students and she knows each one by name.  Maria happily begins and ends every class by leading the group in a song or activity.  She also always has a small gift for children at the end of class.  Maria especially enjoys coordinating her outfits to match the Las Lengüitas theme of the month.  She is definitely a favorite among the students at Las Lengüitas and never misses a class!.